A recently published McKinsey & Company paper, “The Mainstreaming of Additive Manufacturing” (AM), surmises that compared with traditional production approaches, AM technologies offer four potential sources of value. First, their ability to generate almost any 3D shape allows designers the freedom to create parts that perform better or cost less than conventional alternatives. Second, with no need for molds or fixed tooling, every part produced by AM can be unique, allowing for mass-scale customization. Third, eliminating time-consuming toolmaking and fabrication operations reduces time to market by quickening the pace of product development and production. Finally, AM can simplify the maintenance and support of products in the field, reducing the need for spare-parts inventories.

That said, many manufacturers continue to struggle to clearly identify how AM might benefit their companies. Enter the role of the Connecticut Center for Advanced Technology (CCAT), an applied-technology demonstration and training center designed to help manufacturers—OEMs and their suppliers—drive advancements, efficiencies and the adoption of leading-edge additive and digital manufacturing technologies. CCAT’s Advanced Technology Center (ATC), in addition to helping companies adopt AM, also works in the fields of advanced design, automation, metrology, model-based definition and advanced composites.

“We’ve been in existence for nearly two decades,” Dr. Jackie Garofano, CCAT’s chief technology officer, tells 3D Metal Printing. “We were established as one of three regional centers  to help companies become more efficient and productive in response to the offshoring movement of the time. Since then, our mission has evolved considerably, as we listen to industry and its needs, and respond by helping manufacturers identify technologies—AM, Industry 4.0, big data, etc.—that can help them grow.”

Among the key services that CCAT and its ATC provide are supporting manufacturing career-readiness efforts, and providing technology demonstrations to companies, all to help them transform and become early adopters of new technology. Recently, CCAT, under an Additive Manufacturing Adoption Program (AMAP), completed a $600,000 grant program that provided $100,000 matching grants to six CT-based companies to support their AM-adoption efforts. 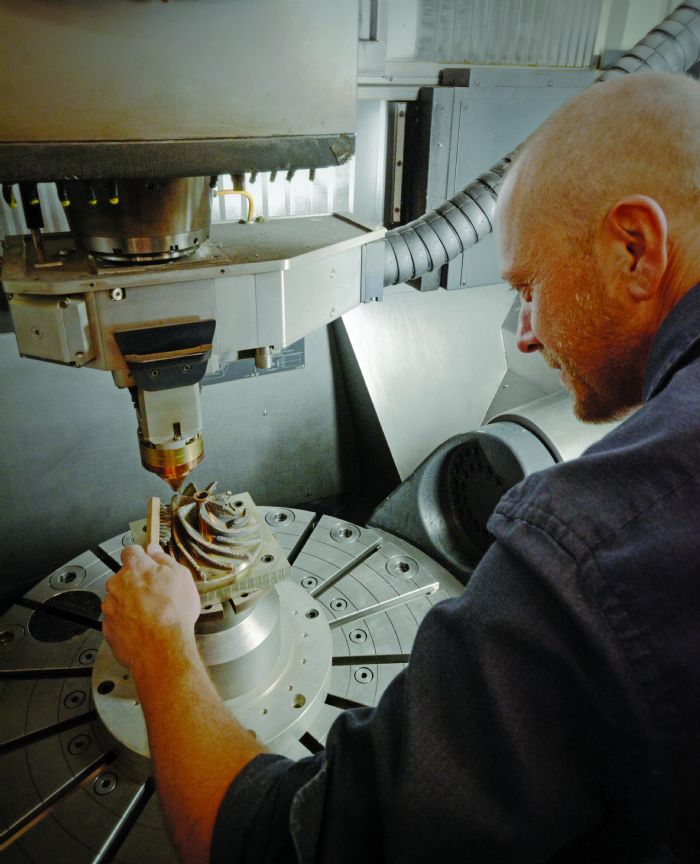 “AM technologies have advanced tremendously and continue at an accelerated rate,” said Ron Angelo, president and CEO of CCAT, at the time of the grant awards. “Supporting the adoption of AM technology throughout the Connecticut supply chain is vital to sustaining the advanced technical capabilities that our state is known for.”

Added Paul Striebel, AMAP’s program manager: “Connecticut manufacturers are clearly striving to stay at the forefront of technology, as evidenced by their eagerness to adopt new AM techniques and equipment.”

AM for Medical, Aerospace and Other Industries

Okay purchased its metal AM system, officials tell 3D Metal Printing, from Rapidia Inc. The setup includes a printer with two independent print heads fed with Rapidia’s water-based metal and support paste, as well as a sintering furnace. As explained by Okay Industries’ R&D engineer Ron Zownir, the Rapidia system is “economical, versatile and open. Parts are sintered overnight instead of taking days as is the case with competitive systems.

“And the relationship we have with Rapidia has been outstanding,” he adds. “The support it provides is above and beyond first-class. As we continue to integrate the capability into our operations, an underappreciated headwind has been design for AM, and playing to the strengths of the technology to maximize its impact. Breaking through requires experience, comfort and confidence in metal additive part making.”

Commenting on Okay’s future use of AM, Zownir points to reducing toolroom burden as an important goal. “Demand on our toolroom resources continues to increase with out strong growth,” he says. “Metal AM technology enables our toolmakers to focus their skills on the work that has the greatest impact.”

Another goal for AM at Okay: enhancing its prototyping services, as delivered by its NexTech Labs R & D centers, established at each of its locations. The goal here, says Zownir: Allow for early involvement with customers in product development, assisting in design for manufacturing and product launch.

“We expect to use our metal 3D printer in concert with CNC machining to reduce lead times and enable customers to iterate more quickly,” Zownir says. 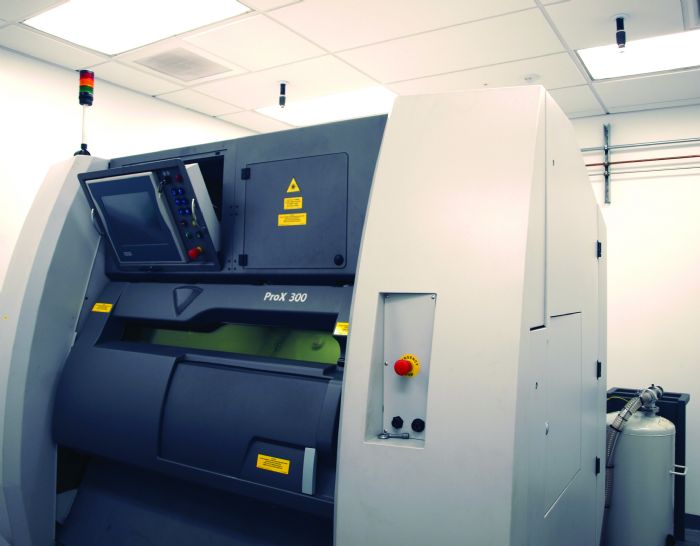 When it comes to supporting local and regional manufacturers with technology readiness, the CCAT team spends much of its resources on the demonstration and adoption of applied technologies for the industrial supply base, working with OEMs, prime contractors and small to midsized manufacturing enterprises. Initially launched as a laser-applications lab, CCAT transitioned into AM in 2011 when it partnered with several local aerospace manufacturers—United Technologies Research Center, Lockheed Martin, Rolls Royce and others—on an Air Force project to study AM for repair of titanium components. Since then, it’s been performing on federal programs for the U.S. Air Force, U.S. Navy and Department of Energy while also providing commercial business for NASA, research institutes and companies across industry sectors.

CCAT also has recently added what it calls a high-rate AM (HRAM) FlexCell, performing wire and/or powder-fed DED. It features an eight-axis ABB industrial robot equipped with interchangeable heads for both wire-arc (WAAM), cold metal transfer and soft plasma (Fronius) and laser powder/wire DED (Meltio) within a 12 by 14 by 10-ft. work envelope offering about a 2-cubic-meter build area.

“We are not membership-based,” Garofano explains, “we exist to serve the manufacturing ecosystem. In Connecticut, we manage state-funded programs that focus on small to mid-sized companies and act as a fiduciary, providing what we call ‘money for manufacturing’ as outlined at ccat.us/programs.”

…lies just up the road from CCAT, at the University of Connecticut’s Pratt & Whitney Additive Manufacturing Center (PWAMC). The center’s current lineup of AM machines—used primarily for research purposes—includes an Arcam A2X (used mostly for Ti-6Al-4V), an EOS M270 machine (for Inconel 718) and a 3D Systems ProX300 machine,” says the center’s director, Dr. Rainer Hebert.

“Of the three commercial machines,” he says, “our ProX300 machine has been the workhorse, and has printed numerous alloy types, including, for example, 17-4 PH stainless steel, Inconel 939 and Monel K-400.”

Most recently added to the PWAMC additive arsenal: a custom-built IPG Photonics powder bed printer installed early in 2019, which features a vacuum chamber, gas circulation system with soot removal, the ability to use two different alloy powders and open access to all hardware and software.

“Most importantly,” Hebert explains, “we easily can modify the machine, using different raking setups and blades, for example, and custom-build plates (4- and 12-in. dia.). And, we can use different gases in the build chamber.”

Research conducted at the PWAMC typically focuses on processing-microstructure investigations. “Of particular interest,” Hebert says, “is the theoretical underpinning of rapid solidification theory for the microstructure and phase formation during AM.”

Also a focus, thanks to the unique amount of flexibility afforded by the IPG Photonics machine, is research directed at developing new AM alloys, aided by using AM simulation software to develop machine settings.

“We also had IPG to design the machines with multiple sensor ports, more than are available on the commercial machines,” Hebert says, “so we can add more sensors and probes into the build chamber and collect additional data during builds.”

Like CCAT, plenty of U.S. military projects fall to Hebert and his team, including steel-AM projects for the U.S. Navy. “We have projects underway for the National Institute for Undersea Vehicle Technology sponsored by the Office of Naval Research, with Electric Boat and the Navy Undersea Warfare Center, Newport, RI, as supporters,” Hebert shares. “The Navy really has gotten behind AM, and expects its suppliers to follow suit, and we’re positioned to help them get there.”

And, last but not least, the PWAMC stays busy working on a massive, ongoing project with the U.S. Air Force Research Laboratory (AFRL), a multi-year effort that encompasses a broad range of technologies, of which AM is just one. “Here we are involved more on the material and process design side,” Hebert says. “We’ve worked in areas such as solidification cracking (of castings and AM parts).”

Another area of interest funded by AFRL: powder-flow characterization and optimization. “Cracking is a real-world problem that we spend a lot of time on,” Hebert says, “developing knowledge. That and powder flow are two current topics receiving much of our attention.” 3DMP 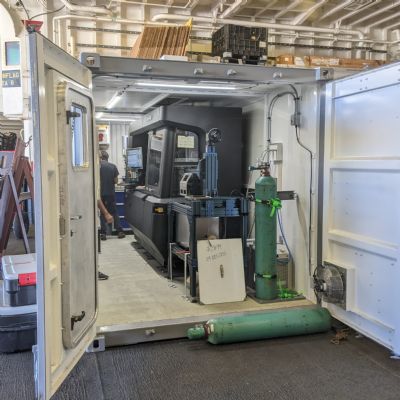 
A First: U.S. Navy Deploys Xerox AM Machine at Sea


What a Difference Six Years Make