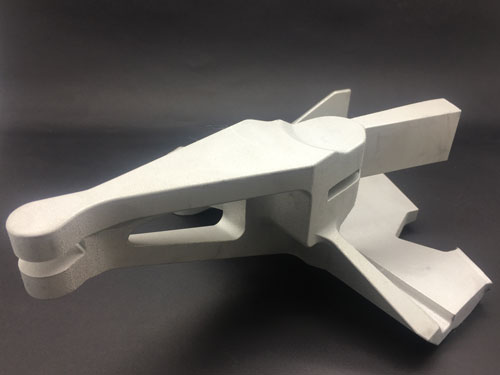 GE Additive and GE Aviation have announced that the Federal Aviation Administration (FAA) has given change-in-design approval to replace a conventionally manufactured power door opening system (PDOS) bracket, used on GE Aviation’s GEnx-2B airline engines that power the Boeing 747-8, with an additively manufactured (AM) bracket.

The PDOS is used on the ground to open and close the fan cowl doors to enable access to the fan compartment for maintenance reasons. The original PDOS brackets on the GEnx-2B engines were produced from a solid block of metal, using conventional methods such as milling, and resulting in about 50 percent of the material being wasted. Now using direct-metal-laser-melting additive technology to manufacture the new brackets, waste declined by as much as 90 percent. GE Aviation has also improved the design to reduce the bracket’s weight by 10 percent.

“We chose this project because it represented several firsts for us. It’s the first program we certified on a Concept Laser machine,“ says Eric Gatlin, general manager, additive integrated product team, GE Aviation. It’s also the first project we took from design to production in less than 10 months.“


How Sustainable Is 3D Printing?